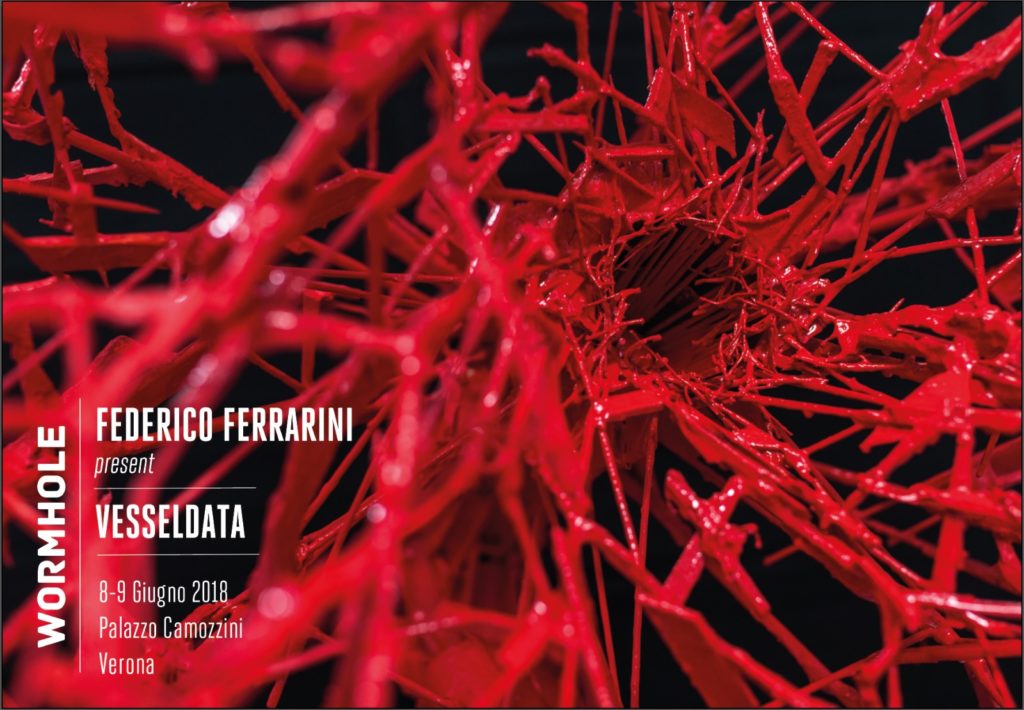 WORMHOLE VESSELDATA
June 8th and 9th 2018 – Palazzo Camozzini – Verona
One-man Show FEDERICO FERRARINI
The pictorial Sun, an archetype which Ferra- rini has represented on canvas through various permutations over the years; reflections of that symbolic element composed of infinite marks or scratches which he calls monoliths and which are the fulcrum and inspiration for each of his works, have materialized in sculptural form, placed in dialogue with a Sun on canvas.
The artist’s intention was to create, in a public location, a continuum between the pictorial Sun and the sculptural Sun, a spatial/temporal com- munication through which any and all can coexi- st, recalling Einstein’s Theory of Relativity.
The site-specific works were created for a signi- ficant location in the city, Palazzo Camozzini, a structure which bears architectural traces of many historical periods, resonating with time’s passage as it provides the setting for the event.

curiatorial text WORMHOLE//VESSELDATA June 8th and 9th 2018 – Verona
FEDERICO FERRARINI
Federico Ferrarini is an artist from Verona who has returned to exhibit in his hometown fol- lowing prestigious international exhibition experiences, particularly in the USA.
The desire to present Wormhole in Verona is in itself a point of departure but also a climax in the career of this multifaceted artist who has reached a mature form of expression, transcending standard painting styles and emerging himself in all areas of the visual arts; from performance to installation to sculpture.
Wormhole is a combination of all of this, for the first time, a work of total art which tells the story of ten years of the artists research and at the same time reveals unpublished works, projects still in progress to be followed by other events in different locations, especially overseas.
Vesseldata, staged in the splendid setting of Palazzo Camozzini, is the first stop for this concept and is a site specific work in which painting and sculpture communicate with each other and at the same time confront each other, interacting with their surroundings, accentuating the same dynamic which links the two themes on which the whole body of the artists work rotates: space and time.
Both these concepts, inspired by physics, are in fact essential for both conceptual and formal understanding of Ferrarini’s poetics who as a painter lets the archetypal figure of the Sun emerge on his canvases through a unique and personal ‘sign alphabet’ in which his ritual gestures and material are perfectly integrated.
Driven by a strong energy these monoliths on the surface of the artist’s work appear to inde- pendently take on their own cosmic order, in tune with reality, subject to the same laws but never converging.
The works of Federico Ferrarini, and Vesseldata in particular, tell of this ‘other universe’, tangi- ble because it has been created by the artist and now accessible as it intersects with reality through an extremely immersive experiential vision.
Wormhole is therefore an important title which, emphasising the suggestion that the cosmos and its dynamics project onto the artists research, evokes the same solution as Albert Einstein’s equa- tions in the realm of the theory of relativity, physically translatable as a tunnel which connects separate points in space and time.
In the Salone degli Dei in Palazzo Camozzini this solution is achieved through sculpture, pain- ting and a dialogue between the two. It lets the audience immerse themselves in a dimension where, from inside, it is possible to explore the artistic philosophy of a cultured, intelligent, con- temporary protagonist for whom the same location, not at all accidental, has a value in the genesis of the work. The palace strengthens the concept of the installation since it is itself the representa- tion of a layering of space and time: space as it rises on the path of the Roman thoroughfare of 1st century Verona, and time because the structure shows architectural traces of all the periods it has crossed, from medieval times onwards.
The work therefore converses directly with the space in which it is located, which contributes to an immersively intimate experience as Vesseldata goes beyond a traditional artistic visual, as the sum result of the work and the space together is greater than their individual parts.

Only a quote from Einstein seems fitting to describe the essence of Federico Ferrarini’s first Verona installation within the Wormhole project, as Vesseldata is to all effects ‹‹a delicate flower which is dependent on a complex series of environmental conditions and which is destined to blossom in only a few places and at specific times››.
– Camilla Compagni, May 2018
event booklet 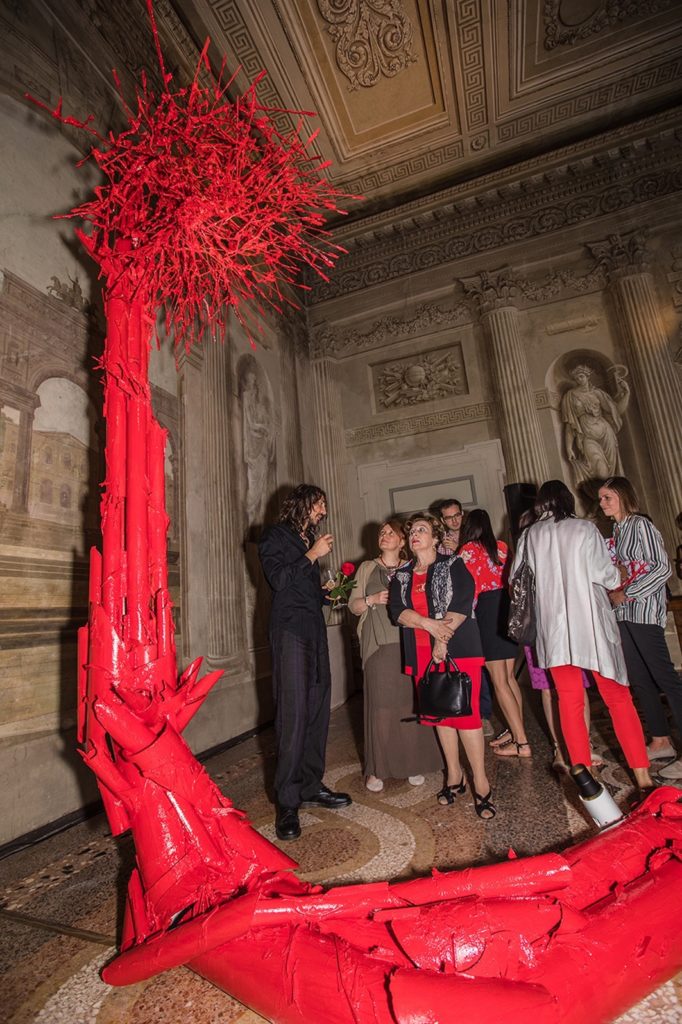 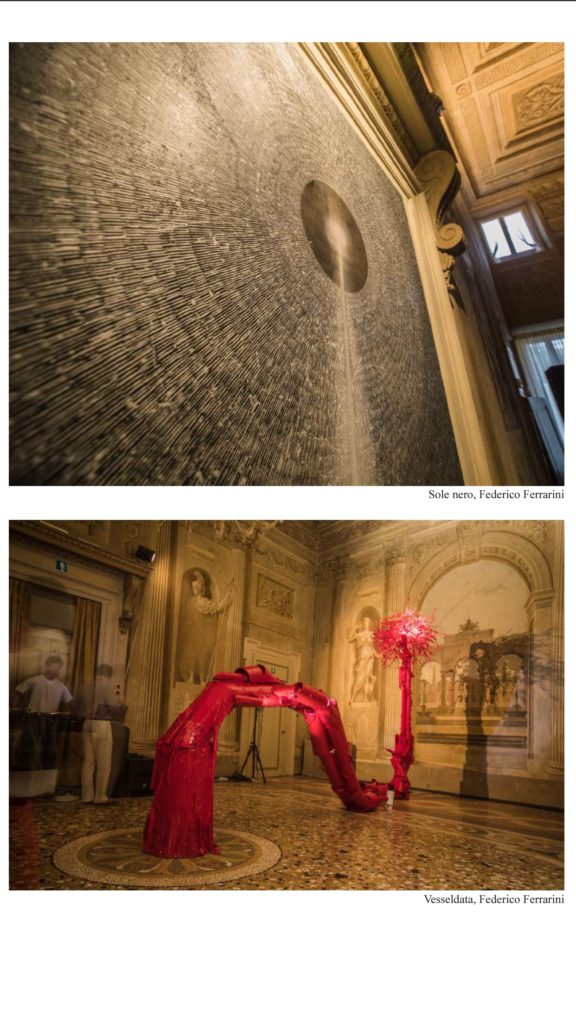 All rights reserved. No images may be copied or downloaded without express permission from the artist.